The issue at hand is the natural inherent color of the Chinese crested eyes. The more brown you see in the eyes the more domestic interference is behind the color. The blue eye is native to the Chinese crested because like the wolf and the dingo they go back to ancient history. The crested sometimes throws a single blue eye matched with a complimentary color and rarely throws both blue eyes. The gene that produces the blue eye in the crested is not the Merle gene that in some breeds will cause other health issues as deafness and or blindness. It has been my challenge since 1992 to predictably produce double blue eyes and up to this time I have witnessed no health issues that accompanied the color of the eye. There are breeders and persons connected to the Chinese crested breed that rebel against the blue eye in the breed. This response is most likely due to the fact that the fixed stare of the blue eye is threatening to them so instead of enjoying the unique beauty of the color they over react and want to eliminate it from the breed even though the AKC standard says nothing about blue eyes. 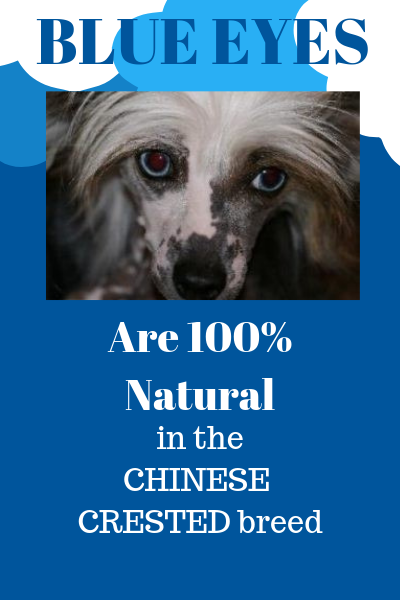 This is the same impulsive reaction that most persons have when they encounter a spider of a snake in their environment and “KILL IT”.   In the wild k-9’s such as the wolves the iris is a pale blue and this unnerves many viewers, as they feel threatened by  the stare of the blue eye that seemingly looks through them and not at them.

Today’s inadequate maturity of the viewer that opposes the blue eye puts the natural beauty of this breed in danger of losing its one remaining connective link it has to the primal ancestry the Chinese crested is entitled to.

I was there proudly showing my dogs. At this Show the American Chinese Crested Association had their yearly business meeting and since I was then a member I was entitled to attend and voice my opinions and that I did. One of the major topics was changing the AKC standard to divide the show classes of hairless and powderpuffs but the major issue was to disqualify the blue eye.

That is the way it has been from day one. A group of persons seemingly without the real best interest of the breed were comparing AKC standard to the English standard, which disqualifies the blue eye. The argument was on for the bigger part of the meeting and I defended the blue eye.

The opposition group failed to make their issues pass, so they formed a BOYCOTT group and since that time have attempted to convince all crested newbies in the ring as well as influencing the judges to down the blue eye.

My personal challenge since this meeting in Dallas was to promote the blue eye with all the effort that I could and since I am one of the largest and best kennel in the United States I had access with ample blue eye carriers that I could successfully chart the double blue probability. 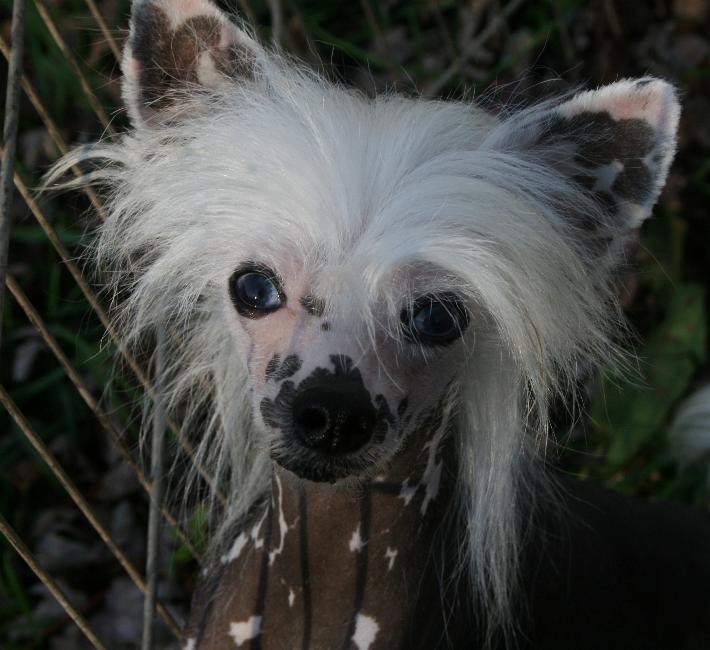 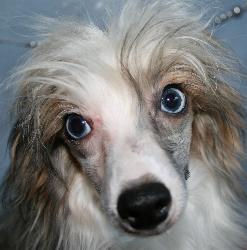 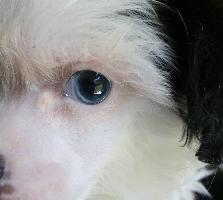 Today I have many generation of blue eyes or blue eye carriers and can predict blue eyes in 90% of the litters that I breed for blue eyes and 60% of them are double blue eyes.

Several years ago I had a male with a handler and he was showing under Joseph Rachaunis author of, “A New Owners Guide to Chinese Cresteds”, at the Putina Farm show outside St Louis Mo so I went to watch him show.  Joseph was a friend of mine as he and his wife had been at my home several time for the purchase of puppies I considered it proper to ask his opinion on the beautiful blue eyed bitch that I had with me and intended to show. After the show I approached him with friendly conversation in the course of which I brought his attention to the bitch I was holding and ask “If I presented her to you in the ring how would you judge her”? he answered that she was beautiful and should champion fast. I then pointed out the fact that she had two blue eyes and his remark has from that day been etched in my brain.“I WOULD NOT KNOW HOW TO DEAL WITH THAT” was his reply. 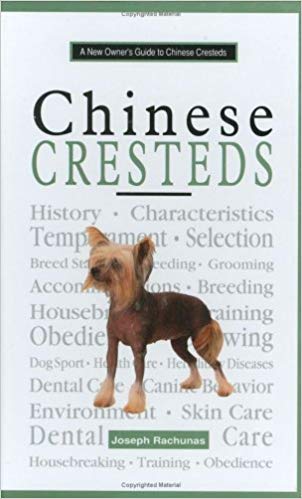 How could a judge, knowing that the AKC breed standard did not disqualify the blue eye make a remark like that?   They still judge the entire dog in accordance with ACK regulations but under certain opinionated pressures they use the English version.  The reason is simply that the group of boy-cotters had successful blackballed the judges into believing that they were correct in customizing the breed to suite their fancy.

Eye color in wild candida family is generally light, wolves have eyes with pale irises. In fact that is part of why the stare of a wolf is unnerving to humans. Most humans respond to a direct, fixed stare by feeling threatened and when the iris of an eye is light then it is quite easy to tell exactly where the light eyed individual is staring. I personally believe this is the major reason that most standards on European dogs call for a dark eyed dog.  In domestic dogs there are several genetic factors that influence eye color and most of the genes are tied into whole body color.

If you are not acquainted with dog coat color genetics or terminology you may wish to read our coat color article first.  The coat color genes which influence eye color include Merle, spotting (S series), liver dilute (also called brown dilute – the B locus) and blue dilute (the D locus) genes, while others – less well understood – affect only eye color.Liver dilute (B locus) dogs tend to have yellow eyes while blue dilute (D locus) dogs have bluish, bluish tan or almost silver eyes. Dogs with the Merle gene may have eyes of different colors, one blue – one brown or eyes with different colors in them – patches of blue in a brown eye, for example.Within most breeds there is also a range of intensity of eye color, which is independent of the coat color genes. Thus with intense selection one can produce a dark eyed blue dilute greyhound or whippet. However the eyes will be a dark blue brown – not the typical dark brown of the non-diluted dog.

It is my feeling – from my breeding program – that the genes that intensify eye color are generally recessive. Crosses of non-dilute dogs with lighter eyes to dogs of similar coat color with darker eyes frequently result in light eyes. The difficulty in studying this is that the coat color genes also influence eye color and so studies of eye color intensity inheritance need to be conducted in lineages in which coat color does not vary. 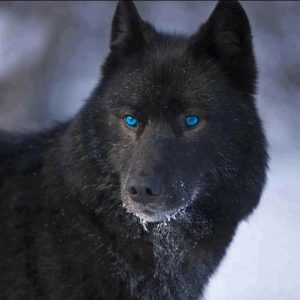 The Merle gene is a semi-lethal dominant – dogs with one dose of Merle show the effects of the gene – scattered patches of missing pigment – including on the iris of the eye. They will also show a structural defect of the iris called ‘iris coloboma’. Dogs with two doses of the merle gene are frequently deaf and seem to have otherwise reduced vigor.Dogs that are white because they are extreme white spotted (the S locus) or in which white markings are so extensive on the head that little or no color is found in the area of the eyes often have blue eyes.

There are several other breeds that may have blue or split eyes – Dalmatians, collies, Shetland sheepdogs, harlequin Great Danes, Australian shepherds and Australian cattle dogs are examples that come to mind.[Comment by Bonnie Dalzell:] Many of these dogs are blue eyed because of the dominant merle coat color gene, which may be connected to deafness. The blue-eyed factor in Siberians is NOT connected with deafness, unlike some of the other breeds in which blue eyes may occur. Deaf Siberians are very, very rare. 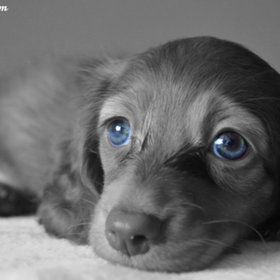 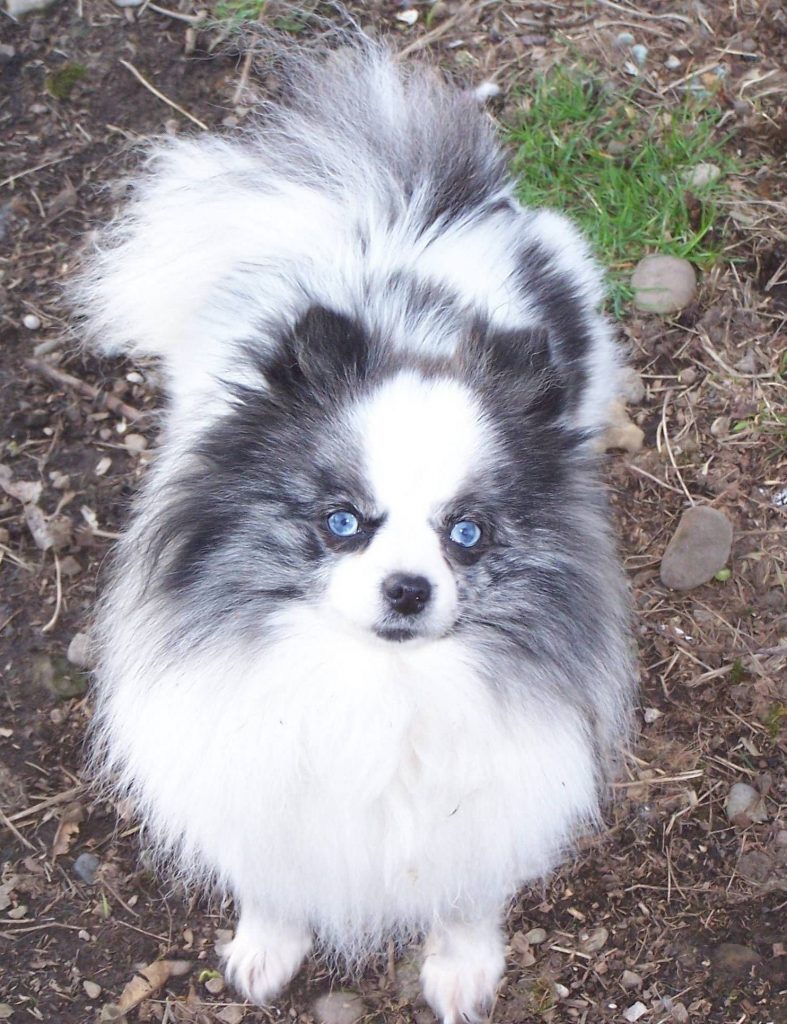 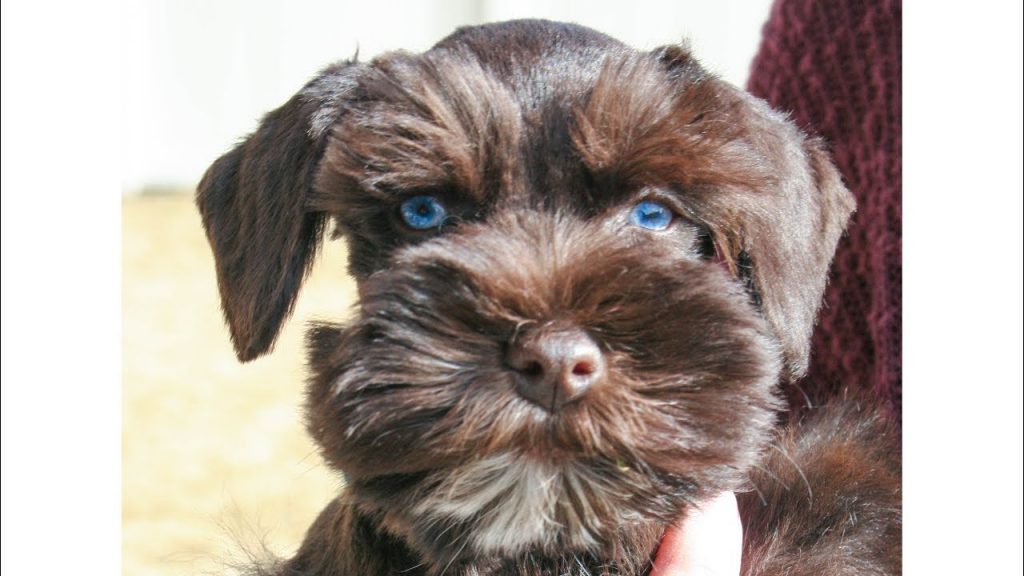 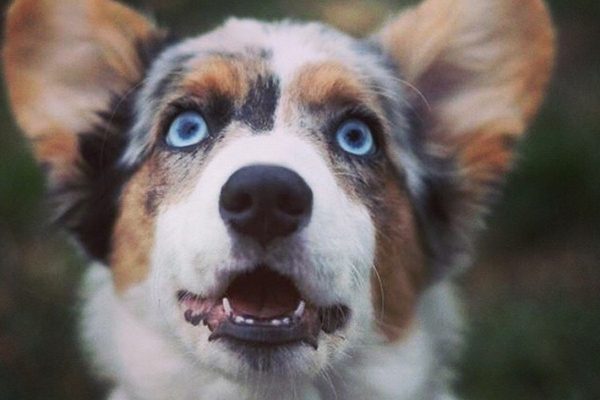 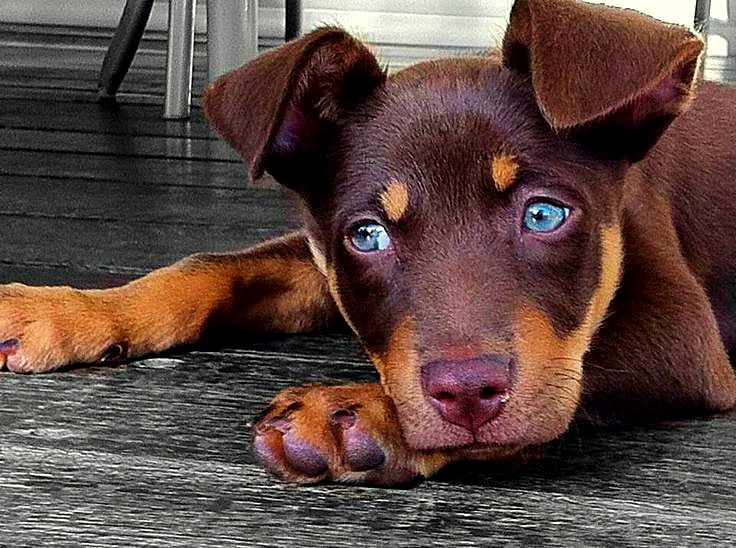 The Chinese Crested DOES NOT HAVE THE MERLE GENE.  Jeri Lee C.HT.